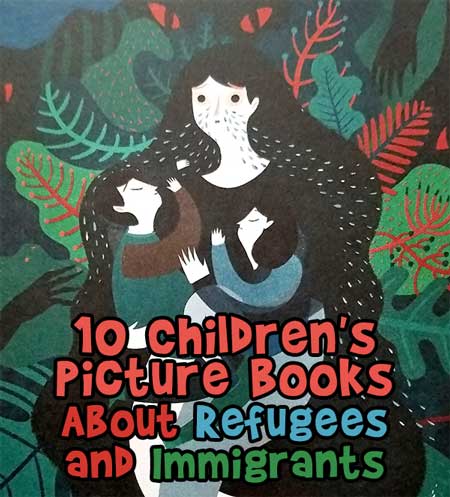 “Give me your tired, your poor,
Your huddled masses yearning to breathe free”

These famous words are part of an 1883 poem by Emma Lazarus, engraved at the base of the Statue of Liberty and intended as a welcoming message to the many hopeful immigrants and refugees to the United States. The debate about immigrants (people who choose to move to a new country) and refugees (people forced to flee their homeland, usually due to political unrest and/or violent conflict) has flared throughout human history. Given the tragic situation in Syria and a recent U.S. executive order directed at Muslim immigrants and refugees, it’s clear we are still sorting this out today. This means that conversations with our kids about empathy, inclusion, being good neighbors, and friendship are more vital than ever.

In honor of Children’s Authors and Illustrators Week (Feb. 5-11, 2017), here’s a list of books for kids about refugees and immigrants. (Note: Due to the complex nature of this topic, few books for toddlers exist, but there is a good variety of board and picture books about multiculturalism for that age group.)

The Journey by Francesca Sanna

In her debut book, illustrator Francesca Sanna uses color and vivid imagery to capture the heartbreaking experiences and unwavering hope of people forced to leave their homeland due to violence against them. Narrated by an unnamed child, The Journey covers a family fleeing their country due to war, including the death of the father during their escape. The story takes the family through many different lands via various modes of transport in search of safety and a new home.

Sanna created this book after meeting two young refugee girls in her native Italy, and set out to talk to more families about their experiences. The Journey is the result of her interviews, designed to help children understand the plight of many people around the world today who are forced to leave their home countries and seek asylum elsewhere.

This Is Me: A Story of Who We Are and Where We Came From
by Jamie Lee Curtis and Laura Cornell (2016)

This is Me begins with a classroom teacher sharing the story of her great-grandmother’s journey to the United States, carrying only a suitcase that held all of her belongings. The teacher asks the class to consider what items they would bring if they only had one suitcase to bring to a new home. The story connects personal identity, family history, and a long-ago story of a child leaving her home country that will resonate with children today.

The illustrations progress from the muted, sepia-toned images of the great-grandmother’s journey to a brightly colored present-day classroom featuring a diverse student population. A pop-up suitcase is included at the back of the book to help kids imagine what they’d carry with them to a new home.

Three students from three different countries – Guatemala, Korea, and Somalia – begin the school year at an American school. Told from the new students’ point of view, Maria, Jin, and Fatima learn to read, write, and speak English and make friends in their new country. Determined to adapt to their new home, they gradually adopt new skills while still retaining their original cultural identities, with the support of teachers and fellow students. All of the students learn that they have more in common with each other than they realized.

Author Anne Sibley O’Brien is a founder of I’m Your Neighbor, an organization that promotes “new arrival” literature for children. I’m New Here helps kids understand and empathize with the struggles of starting over in a new place, and also how to be good neighbors and friends to someone from another culture.

Oskar and the Eight Blessings by Tanya Simon (2015)

Winner of the 2015 National Jewish Book Award for Children’s Literature, Oskar and the Eight Blessings is a tale about a young refugee fleeing Nazi Germany in 1938. Oskar arrives in New York City on the seventh day of Hanukkah which also fell on Christmas Eve, with only the address and a photo of an aunt he’s never met.

As Oskar walks through the enormous city, he encounters different holiday decorations and meets local residents, each of whom grants him a simple kindness. This story captures the loneliness and fear of having to leave your home behind during wartime and how much simple kindness and generosity can make such a big difference in the experience of someone new to your country.

When Unhei arrives at her new American school from Korea, she worries no one will know how to pronounce her name, so she tells her new classmates she will come up with a new name. Trying help, Unhei’s classmates fill a glass jar with potential new names for Unhei, who tries them out to see how they feel. Meanwhile, a classmate visits Unhei’s neighborhood and learns the special meaning behind her real name. One the day of her name choosing, Unhei chooses her own name and teaches her new friends how to pronounce it: Yoon-hey.

The Name Jar is captures the emotions surrounding kids’ desperate need to fit in, especially after moving from a country and culture very different from their new home. It also helps kids empathize with these challenges and shows them how to be good friends who honor a new student’s cultural heritage and traditions.

As an Iraqi family is forced to leave their home in Musul, they bring their beloved cat, Kunkush with them. When Kunkush escapes when their ship stops in Greece, aid workers rescue him and are determined to find his owners, who traveled on to their new home in Norway. After contacting the news media and posting on the Internet, months later the family is reunited with their beloved pet.

This true story includes photos of the Kunkush and his family, and a map of their journey. Lost and Found Cat depicts the frightening reality many families face when forced to leave their homeland, including the loss of pets during a long and uncertain journey. It also shows how when people work together for a greater good, amazing things can happen.

The Colour of Home by Mary Hoffman and Karin Littlewood (2002)

First grader Hassan feels out of place in his new American school, and homesick for Somalia after his family was forced to flee due to the violent civil war there. He struggles to communicate with his new teacher, but quickly learns to do so by drawing and painting pictures. Through his art, Hassan is able to tell the story of what he misses about Somalia, the violence he witnessed there, and also things he is coming to appreciate in his new country.

The Colour of Home shows the value of using art to express grief and sorrow, and also of hope and healing, particularly for children who don’t have the words to express those emotions, whether due to age, developmental, or language barriers. It also gives readers an idea of the pain and loss suffered by many war refugees, and how finding safety and kindness in a new home can bring deep healing and solace.

When a group of neighborhood friends is hanging out on a summer day, one of them suggests they play war, dividing into two sides and using pine cones as hand grenades. One of their friends, Sameer, is reluctant to join in. He quietly tells his friends that children their age are living in a war zone in his homeland. At first the other kids don’t believe him, but as Sameer shares what happened to his home town and relatives, his friends decide that basketball is a better choice for them.

Playing War helps kids understand how they can sometimes take cultural norms like life during peacetime for granted. It also gives readers empathy for children who had to flee their home countries due to violent conflict.

How I Learned Geography by Uri Shulevitz (2008)

When a family must flee their homeland due to violence, they end up living in poverty in another country. Food is scarce, so when his father brings home a map instead of dinner, the boy is furious with him. But the map adds color to their drab living quarters, and the boy studies the map and learns that he can travel the world in his imagination.

How I Learned Geography is based on author Uri Shulevitz’ life story during World War II. The illustrations tie in with the book’s theme about how imagination can ease suffering and bring solace.

How Many Days to America? A Thanksgiving Story by Eve Bunting and Beth Peck (2003)

How Many Days to America tells the story of a Caribbean family forced to flee their island home and travel to the U.S. by sea. The boat is crowded with other families and the family faces hunger and even robbery on their journey. Landing on Thanksgiving Day, they are welcomed by a family who invites them to share their celebratory feast.

This story mirrors the journey of the first European pilgrims traveling to America, and helps readers understand that what may seem like distant history is still relevant today. It captures the hardships families face when forced to leave their homes and arrive in a new place, often with very few possessions and little money, in order to live in freedom.