When I had to idea to create some finger puppets out of pipe cleaners, little did I realize what creativity I would unleash in my children. 3 packages of pipe cleaners later, I have enough different finger puppet ideas for probably 10 more posts! I had no idea these would be such easy crafts for kids.

Pipe cleaners are extremely forgiving and deceptively easy to work with. Anything you ‘mess up’ while bending them is fixable. And by using a hot glue gun, you are pretty much unlimited in how you can attach eyes, limbs, and embellishments.

What you Need to Make Easter Finger Puppets

How to Make Easter Finger Puppets

Once you see the components of each of these pipe cleaner finger puppets, assembly is pretty self-explanatory. But here’s the key “puppet base” that they are all made from:

Step 1 is to take the pipe cleaner and wrap it around your finger. I like to do it rather tightly, because once it is off of your finger, it is easier to stretch it out than it is to tighten it up.

Important: Notice that the top of the pipe cleaner coils down to a smaller circle. Do this so that it is easier to glue the pom pom head on top, and to lessen the possibility that you will get the hot glue on your fingers (which, if it hasn’t happened to you yet, pray that it doesn’t. OMG.)

Here are the pieces of each of the pipe cleaner finger puppets shown above. I was skeptical whether the hot glue would work on some of these pieces, but it worked perfectly. Just put a tiny dab of glue onto the wire end of the pipe cleaner and stick it straight down into the pom pom – it will stick after just a second or two of holding it in place. 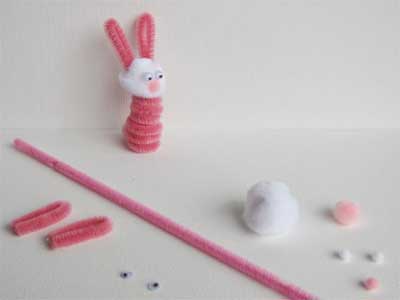 After gluing the white head onto the pipe cleaner body, stick a dab of glue onto both wire ends on one of the bent pipe cleaner ears. Stick them firmly into the pom pom while squeezing the ends together.

Glue two tiny white pom poms on the face as a base to stick the googly eyes. This is really optional, and you can see on the kitten finger puppet below that you can also just glue the googly eyes directly onto the pom pom head.

Then glue on the pink nose and the medium sized pink pom pom for the tail. 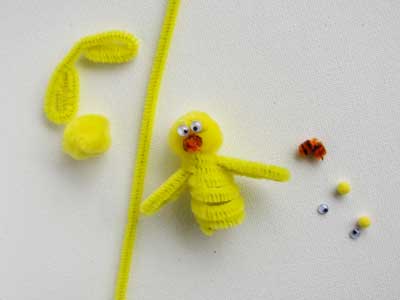 After gluing the white head onto the pipe cleaner body, clip a tiny piece of orange pipe cleaner and bend it into a V shape, and glue it onto the middle of the face. Glue the two yellow mini pom poms right above the beak to make a base for the googly eyes, then glue them on top of them. Take about a 4 inch piece of extra yellow pipe cleaner and bend it into the wing shape as shown. You don’t even need to glue these in, just slip them onto the body in between the coils and they will stay put. 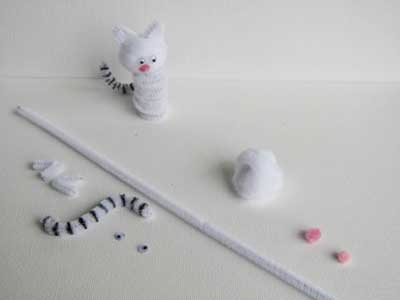 After gluing the white head onto the pipe cleaner body, clip two small pieces of white pipe cleaner (about 3/4″ long) and bend them into a V. Glue them onto the top of the head. I skipped the extra tiny pom pom eye base on this one, wanting to go for a more “Hello Kitty” look. You only need one tiny pink pom pom for the nose, but here’s a little tip: if you don’t have a tiny pom pom to use, you can clip a tiny piece of pink pipe cleaner (less than 1/4″ long) and glue it onto the face instead. The tail is attached by bending it onto the bottom coil on the back of the kitten’s pipe cleaner body. 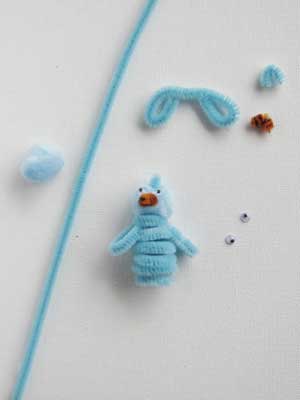 To make this variance on the Easter chick, I omitted the mini pom pom base for the eyes, and added a little tuft of feathers on the top of the head the same way I did the kitten’s ears (but only added one and put it on lengthwise instead of sideways). The wings are also a slightly simpler version of the yellow wings, and might be easier for smaller children to bend on their own.